We've added support for clans across various plugins, including:

Additionally, the friends chat plugin was renamed to Chat Channels and allows adding join/leave messages to clan and guest clan channels, as well as changing your target chat channel by simply typing /f, /c, /g, and /p, as shown below:

We have added a plugin panel for the Party plugin which shows your active party members and has UI for adding new members to your party and toggling specific players' health and prayer displaying in the overlay. Because of the added panel button, the Party plugin has been disabled by default and must be re-enabled for those wishing to use it. It also simplifies the invite flow (still via Discord) so it is possible to create a party and send invites immediately, and also allows accepting join requests via the client in the panel. 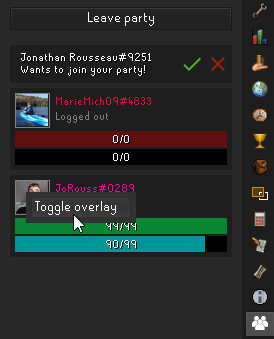 You can now manually reset the XP/hr rates of the XP Tracker plugin without resetting the gained XP, and configure it to automatically reset these rates after a set timeout duration.

We had 6 contributors this release!