2 years ago by Adam

The 1.6.12 release that went out last week was forced due to the game update, but we did not have a blog post ready. This post covers both releases.

The Leagues hiscore lookup has been replaced now with the newly opened Deadman tournament, and the various lookup commands in game now recognize the Deadman tournament worlds and will look up the correct hiscores for them.

Divine Bastion and Battlemage potions have had timers added, and have been added to the items stats and item identification plugins. 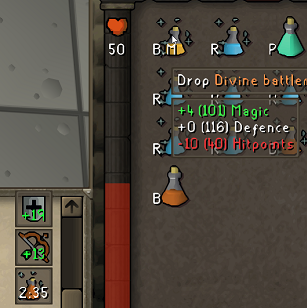 If you use Windows or Linux and the GPU plugin does not work correctly for you, there is a new option in the GPU plugin you can disable called Compute Shaders which may help. This drops the minimum required OpenGL version to 4.0, and uses less GPU memory and compute, at the cost of being unable to extend the draw distance. Despite this limitation it still gives a noticible performance improvement and may be beneifical to users on older systems. Note that the option must be toggled off prior to the plugin starting to take effect.

Users using Mac OSX will be happy to know that progress has been made on an OSX GPU rasterizer that works as described above, due to the limited support of OpenGL on OSX, and that I expect to have it added to a release in the coming weeks.

The XP updater plugin can now send xp update requests to Wise Old Man, a new xp tracker created by @psikoi - who you may remember from the obsidian theme, and has been a contributor to this project for years. It is open source, which of course I value greatly, and recommend you check it out. Since CML has began running RWT ads, which I dislike directing traffic to, I have been looking at alternatives; another tracker we added a few months ago is TempleOSRS which has been gaining populartity, although not open source. Remember, sending xp update requests to any external services necessarily sends your IP address and your display name to that service.

A new bank tags section was added to the accounts page which shows your bank tags and the codes used to share them with other players.

We had 23 contributors this release!